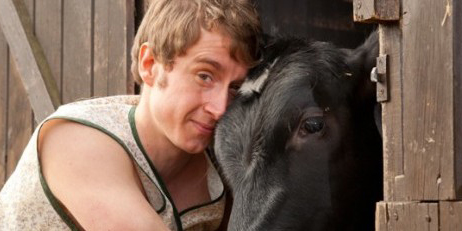 Buttercup is a fat cow from Lancashire. She’s lovely. She’s really looking forward to meeting you all. She can’t wait to tell you, amongst other things, how she won Masterchef by feeding her stillborn baby to a fish and a potato and what happened when she was made the star of her own TV show ‘The Only Way is Lancashire.’

Since 2006, Tom has been commissioned and produced by Bristol Old Vic, Theatre Royal Bath, Hull Truck Theatre, Paines’ Plough, North Wall Oxford, and until recently was editor of Bristol and Bath’s culture mag Venue. He is an alumnus of the 2010 Royal Court Young Writers Programme and Autumn Studio Group and has worked extensively with Exeter’s own Theatre Alibi.

Having trained in acrobatics before turning to writing and comedy, Tom has developed a highly physical approach to storytelling, marrying his controversial, political material with physical skill.

Buttercup continues the theme of borderline offensive satire but for the first time is contained within a deeply sympathetic, very friendly character – Buttercup herself.

Tom was born in Devon and now lives in Bristol Buttercup has been developed through Bristol Old Vic’s Ferment programme.

Want to do a workshop with the brilliant Tom?