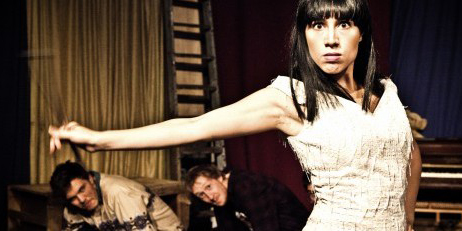 In the 1960’s an underground coal fire was sparked by an accident. 20 years later the fire was still burning and the inhabitants of Centralia were forced to relocate. 3 people refused to leave. Inspired by this true story, Centralia sees the 3 remaining inhabitants come to Lakeside Theatre to tell the world their story.

Using a mixture of comedy, cabaret, dance and music, this  play explores the relationships that can only be formed through this unique disaster.

is an international company formed at the Jacques Lecoq Theatre School in Paris. Nationalities include Norwegian, Swiss, Ecuadorian and British. They are an ensemble company that creates theatre which appeals to a variety of audiences and can be played in many countries and locations. They devise all of their theatre collaboratively, often through improvisation and drawing upon true sources. There is no single director, rather they write and direct together in order to realise a shared vision. Laughter is key to the theatre they make.