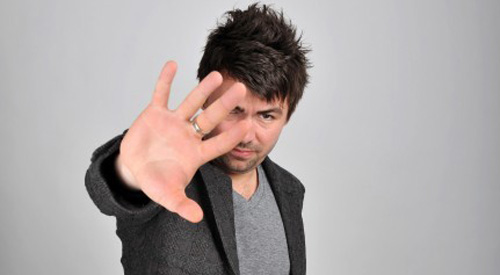 Words by Lewis Butler. The full interview can be read at The Rabbit Arts Blog.

Richard Pepiatt is a man who seems to be in a one man redemption crusade against the press barons of this country, of course backed up by the Leveson inquiry, which he appeared in front of twice. He was kind enough to answer a few questions for me before he comes to Essex.

I of course began by asking him what we could expect to see at his show, his answer was … well ..

“A bit of nudity, not from me. Well there’ll be quite a bit of nudity actually, I’m trying to count up the number of tits and cocks in it at the moment, it’s certainly late night viewing. It’s controversial…but most of all it’s supposed to be funny… It’s a bit different… you won’t see anything like it I suppose. I don’t know anyone else who could do something like it. Certainly if you like to see powerful people made to look like tits and embarrassed, it’ll be a good show for you. Especially if you’re interested in the Leveson inquiry and newspaper stuff.”

Peppiatt appeared before the Leveson inquiry twice, so with my best journalistic hat on, I continued my questions down this avenue. ..

“We talk about that a little bit [in the show] it’s not really focused on that, but obviously the context of the show is in this post Leveson world, and often what I’m doing with the editors is I’m taking what they said at the Leveson inquiry and the proclamations they’ve made, which certainly I would say a lot of it is bollocks and they’re lying through their teeth, and I’m testing how they like the standards that they claim to hold applied to themselves. So if they say they don’t see anything wrong with door stepping people, you know investigating their private lives, well how do they like it when I doorstep them and investigate their private life. The answer, you can probably work out, is not very much.”

Peppiatt’s show also addresses the state of current journalism. That is to say how certain tabloids are engrossed in spouting what a celebrity did over the weekend, or even worse they promote xenophobia by saying that councils are looking after one group more than the other, which leads people to live in a complete fallacy, causing them to hate the other groups or whomever. So I asked Peppiatt who’s to blame for these celebrity and/or xenophobic newspapers, the papers themselves or the readers?

“Certainly the tabloids like to say “we’re only giving people what they want.” But you know just because a lot of people buy something, or want something doesn’t make it right to give it to them. For example we could bring back public hanging tomorrow and it may attract a big crowd, but does that make it right? If we just allowed sales to define the morality, our society would really be down the pan, because we would just do anything that sold… I think the newspapers have a responsibility to think “what is the effect on people who become the subject of the stories?” But at the same time you know celebrity culture is something that they encourage, as well as reflect. I think there is a general process of tabloidization, that filters down through tabloid press into various aspects of our culture.

I asked if there was any point to newspapers being celeb orientated, or even if they had to rally up anger, in order to compete with the competitive markets of online journalism and blogging etc.

“No… one thing that advocates for tabloid newspapers…is arrogance on the part of the people who criticise the tabloids to try and dictate to people what they can read. You know, well firstly I’d like to say there isn’t any arrogance on my part I used to work for a bloody tabloid, so I’m not arrogant about it at all. I think the arrogance is on the part of the tabloiders themselves, you know they’re usually privately educated, wealthy, white men  who do not reflect the population as a whole, and I think they offend the intelligence of the general population when they think the only thing they want to read about , or can handle reading about is Jordan’s latest boob job. That does offend people’s intelligence, because there are a lot of important people in the underworld who get pushed out of the newspapers to make room for cock and bull stories about celebrity romances.”

So just how great do you think these white, wealthy, privately educated male newspaper owning people have on the direction of the media in this country?

“Well, a vast amount. You know whatever they say about editorial independence is complete bollocks. Nothing goes in there papers, they don’t know about. You know if they support the Tories their papers aren’t going to be supporting Labour, they won’t allow it to. They may not have the power to make or break prime ministers anymore but having seen the Leveson inquiry, they still are some of the most powerful people in this country.”

To finish do you have any advice for up and coming journalists?

“It’s a great career, great industy. You have to go into with eyes open, there are fewer jobs than ever, it’s going to be hard to get your foot on the ladder. Pay’s shit, working conditions are shit, but if you have the passion there are opportunities out there. Don’t do what I did, which is climbing up the greasy pole, and launch all your principles down the river. You know you still have to look yourself in the mirror at the end of the day.”

Richard Peppiatt is at the Lakeside on 1st February, that is next Friday, tickets online at http://lakesidetheatre.org.uk/events/one-rogue-reporter/.

Lewis Butler is Arts Editor at The Rabbit Newspaper.